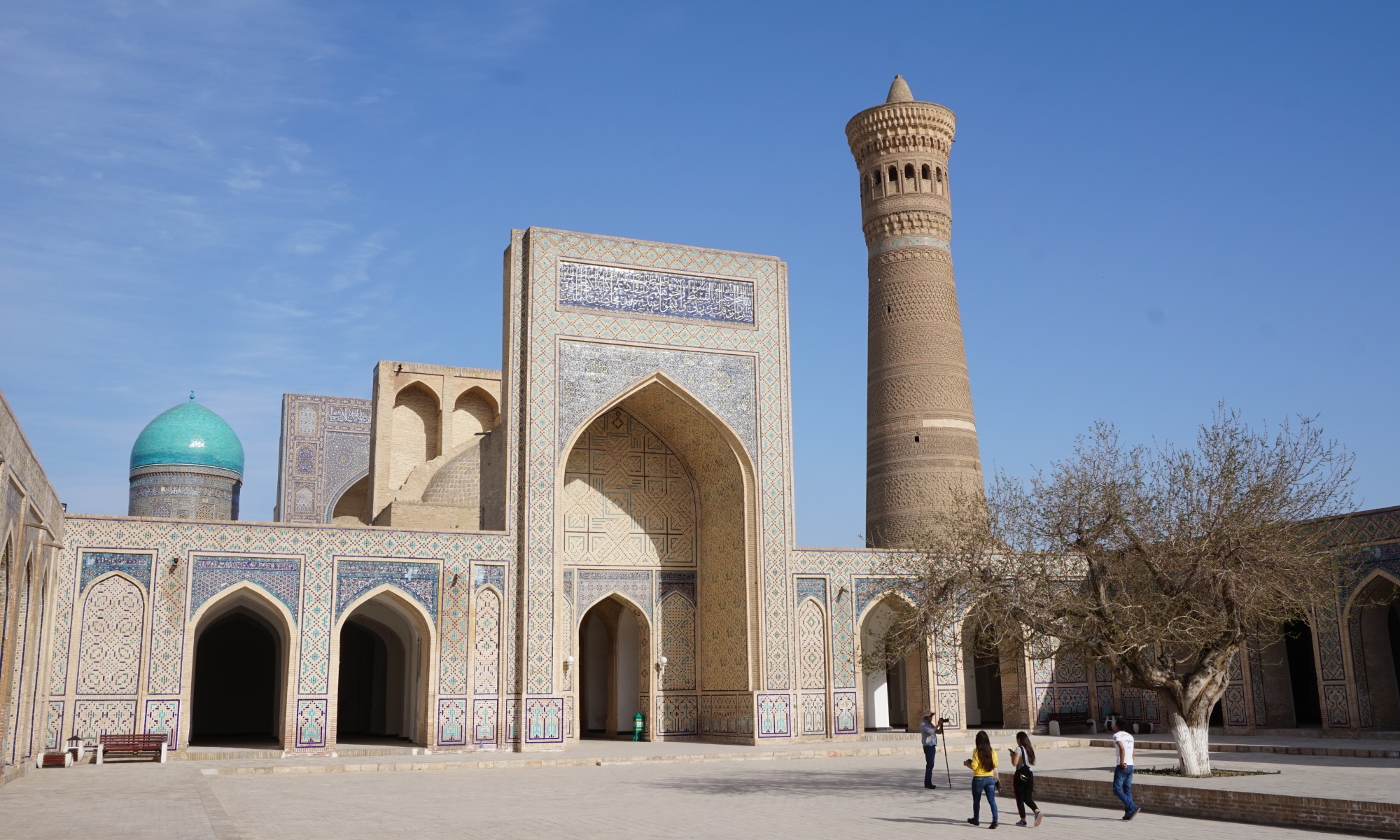 Bukhara is indeed a city of sightseeing! And for the first time since the Winter Olympics we encountered bus loads of other tourists. We even encountered a Danish group and secretly followed them around the city to listen to their Danish speaking guide 😉 Literally, Bukhara has a beautiful building at every corner, so we have got a ton of pictures of beautiful sandstones and blue tilework.

The Danish group and their guide. We got a lot of interesting facts about Maghoki-Attar 😉

The view on top of Char Minar 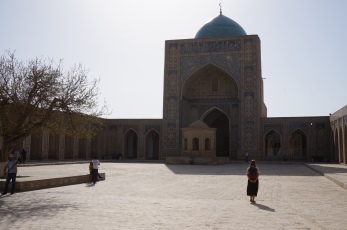 The courtyard of Kalon Mosque

The courtyard of Kalon Mosque

Our favorite lunch-spot in Bukhara

Bukhara is definitely more geared for tourists than Tashkent, but still the locals are extremely curious and very friendly. By now Gitte can understand and answer the following very common questions all in Russian:

Where are you from? — Denmark.
Ah, Denmark. Very small. How many people? — 5 million.
Is that your husband (pointing at Ulrik)? — Yes, my husband.
Are you married? — Yes. (We are not, but that is too complicated to explain…)
Do you have children? — No.
Oh, children are the best. You should have some! — Yes, yes. (Smile and wave)
Goodbye! — Goodbye!

Gitte even managed to have this conversation with an Uzbek grandpa passing by on his bike! In addition to that our Russian now includes a rough sketch of our Central Asian route — pretty easy as all the city names are the same in English — basic bargaining over prices, “where is the toilet”, and “no thanks, no taxi”.

It also seems that the children of Bukhara learns quite some English from an early age, and they are definitely not shy using this! So walking on the street we are often approached by children saying hello, asking our names, and where we are from. We even got the chance to help a kid fix his bike, after which his friend asked us to take a photo of him and his brother. Also, a girl in the house of one of the “public” toilets spoke very well English, and prepared a small bouquet of flowers for Gitte while she was at the toilet. 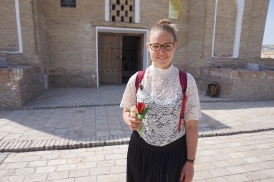 It is a little weird to walk around and be approached by random people all the time, but we try to enjoy this gesture of friendliness and curiosity without getting too paranoid about scams. Nobody has stolen from us yet, so maybe it is just regular people being curious 😉

Next stop on our route was Samarkand — another city full of history and Silk-route feel. As in Bukhara we found a beautiful building at every corner and got another 100 pictures of blue tiles. We also got to talk with a souvenir seller selling locally produced embroideries. He was incredibly knowledgeable about pretty much anything, and we spent one hour or more talking with him about the development of Uzbekistan, the many types of tourists he sees in his shop, and his journey to Sweden, where he bought a sewing machine from a “loppis” (Swedish version of a second hand shop earning money for a good cause).

A random guy offered to take a picture of us in front of Gur-E-Amir Mausoleum. He turned out to be our new German friend, Carsten.

One of the three statues of Amir Timur around the world.

Also, we met our German friend Carsten (randomly, at one of the sights, but it turned out he had just checked in at the same hostel as us) with whom we teamed up to share a taxi to Shakrisabz, a UNESCO site some 90 km south of Samarkand. Here we found the very impressive ruins of Amir Temur’s Summer Palace — and learned that what was left was only half the height of the original construction! Quite impressive. A great day of talking to locals and having the tourist sites almost alone.

View from the mountain pass between Samarkand and Shakhrisabz. 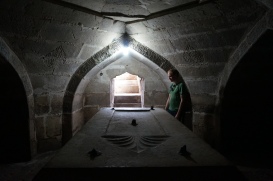 The mausoleum intended for Amir Timur, although the mountain pass was full of snow when he died, so he never got to be burried here. 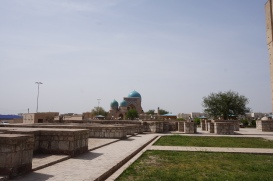 Kok-Gumbaz Mosque from the distance. 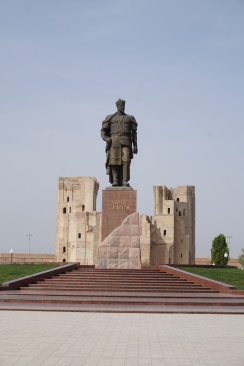 The second of the three statues of Amir Timur around the world. Yes, we also got to see the third one in Tashkent 😉 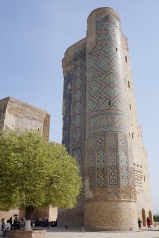 Remains of the tilework on the Summer Palace (Ak-Saray)

Our last day in Samarkand was completely different from the others as it was a Sunday — and Sunday means that all the local tourists are also coming to see the attractions. Samarkand was full of neatly dressed Uzbek tourists, and each and everyone wanted a picture of the weird trio of pale European tourists. We feel with all famous people around the world for whom this is just normal 😉 It was a little too much, but when a small kid has the courage to come ask you in English for a photo you simply cannot turn him or her down! And with patience we also got to see the sights ourself, paying 17-30 times the entrance tickets for locals. Samarkand is definitely set up for tourists nowadays! 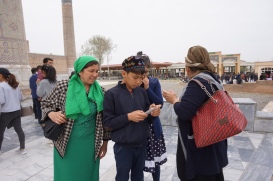 Some of the local tourists trying to make their phone work so they can take a picture of us. The boy asked so kindly in good English, so why not 😉

A local souvenir seller in the old city dressed Gitte up for pictures. 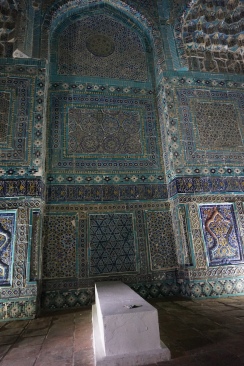 One of the mausoleums in Shah-i-Zinda. Grave peace is not really a thing here.

Shah-i-Zinda and the crowds of local tourists.

The only remains of Ulugbek’s astronomical observatory.

The view from Hazrat-Hizr Mosque — down on the crowds of local tourists.

During the day we also met quite some young ambitous people who wanted to talk with us to improve their English. As usual we were totally paranoid that it was a scam, and it did not help that Uzbeks can be quite persistant when you try to turn them down! Over time, though, we relaxed a bit, and we had some really interesting talks with young locals sharing their dreams and aspirations from a world so different from what we know in Denmark.

Our original plan was to move on to Tajikistan after Samarkand, but for various reasons we decided that we would rather go see the southern part of Kyrgyzstan first (somewhat ruining the perfect loop we planned for in the beginning). This includes a slow train ride through the Fergana Valley to Andijon, the gateway to get to the border. The railway includes a 20 km tunnel on the way, but to Ulrik’s disappointment we were all asked to roll down the blinds when passing, so he did not get to see anything!

When boarding the train we again met another two Germans with whom we had shared our room in Samarkand. Uzbekistan is quite big, but all the tourists go to the same places!

After some two weeks we now say goodbye to Uzbekistan, and head for the border to Kyrgyzstan. After two weeks of sightseeing, and old buildings we look forward to mountains and hiking!