Our second big adventure while in Bolivia also centred around amazing nature. This time we were guaranteed very few animals, as our goal was the huge salt flat near Uyuni and the surrounding desert.

Once again we found ourselves on a night bus, and early morning we arrived in the desert town of Uyuni. With the help from a lady handing out business cards for her restaurant we managed to find the company we had booked with. Or, we learned, the local company operating on behalf of the company we had booked with. Unfortunately, Gitte remembered this local company from numerous online not so positive reviews. There was not much we could do about it besides being disappointed about the company selling us the tickets in La Paz, so we sat down and waited for our car to come and pick us up.

However, our disappointment would only get worse. The car showed up (45 minutes late) in a poor condition, and with a teenage driver who seemed to hate tourists. Our vehicle and driver/guide for the next three days… GREAT! Also, the car was not even from the local company — we had been “sold” once again to another operator. We were hugely disappointed about the whole situation, and slightly worried about the condition of the car. But off we went.

First stop was the train cemetery just outside of Uyuni. Here, old steam trains have been parked since the 1970’s, and the area now features an impressive collection of old rusty locomotives, passenger wagons and what not. More interesting, though, was it to walk around and observe which parts of the old trains had been taken away (upfront or by opportunistic locals) for reuse. 😛 Impressive how much people would struggle to get some random part of a train! 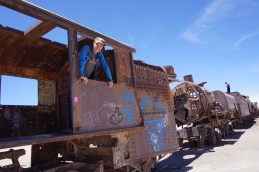 Next stop was the impressive salt flat outside of Uyuni — the world’s biggest (10,582 km2). It looks like a huge frozen lake with nice, evenly distributed snow all over. In reality it is solid salt. The salt appears after it is washed down through the volcanic surroundings, and reappears on the surface mixed with water. As the water evaporates only the solid salt is left. In the middle of this ocean of salt there are some islands of rocks and cactuses. We climbed the biggest one to get a great view of the salt flat surrounded by mountains. A full day of amazing sights and photo opportunities! 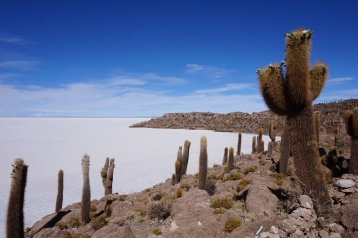 Besides the driver being chronically late, our worries about the car and driver situation came to shame this first day. We made it all the way to the other side of the salt flat, and spent the night in a local guesthouse built from blocks of salt. Weird? Yes. But mostly, it looked like any other rural guesthouse 😛

On our second day we left the salt flats to explore the surrounding desert and its coloured lakes — and the many flamingos. Have you visited too much amazing nature, when nature like this doesn’t impress you any more? 😛 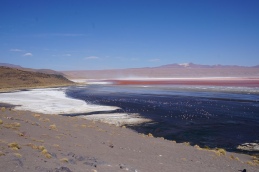 However, what stands out from this day is mainly that our worries about the car came true. The right rear wheel fell off the car. Not just the tire. The whole wheel came off and rolled next to the car while we slid in the sand. Luckily, it happened on a flat part of the road, and we were not driving too fast — so nobody, besides the car, was hurt.

This was when we realised that our optimism that the driver knows and cares about his car — that a poor condition on the surface does not mean that it’s a bad car, and that the driver of course brings spare parts when driving three days in the desert — turned out to be just optimistic, touristic expectations. We found that the driver had no extra bolts and nuts, we noticed that none of the wheels had all their nuts from the beginning, and that the driver had only an overall idea of how to change a wheel and fix the broken parts. Furthermore, he did not really want us to help, even though our French co-tourist had experience as a mechanic.

Luckily, the driver in one of the other cars had noticed that we did not arrive at the lunch spot and came back to see if we were in trouble. He was twice the age of our driver, had the right tools, and plenty of knowledge about how to change a wheel. He ordered our driver to serve us lunch while he put our car back together in about 30 minutes. The rest of the day he timed it so his car could follow ours. Either he really liked our teenage driver and tried to help him, or he was worried that if he left us we would end up stuck in the desert. No matter what, we were really relieved that he took his time to help us!

We spent the night in another local guesthouse, and woke up at 3.30 to go see the sunrise over an area full of geysers. However, our driver was late (do not EVER be late, when you ask people to wake up at 3.30 😉), and when we finally tried to start the car it turned out that the battery was dead. Once again our hero from the day before came to the rescue — and half an our late we headed towards the geysers. We missed the sunrise, but nonetheless it was an amazing sight!

We saw a few more lakes, visited a hot spring, and around 9 am we said good bye to our driver at the border crossing between Bolivia and Chile. Or he dropped our luggage and left without saying goodbye. We were relieved to get out of the car without any serious accidents, and glad that we where now on our own again. 😀 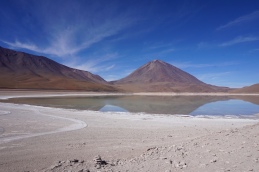 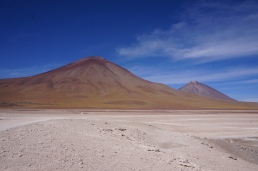 However, we had not calculated in that we had now arrived at the slowest border crossing we have yet encountered. On the Bolivian side everything was chaos. The border control office was a trailer left in the middle of nowhere and had absolutely no signs. Our transfer to Chile was administered by one of those really untrustworthy guys that gives you creeps as soon as you meet him. He came to us and said: “Give me 15 bolivianos per person and your passports and I will get you through the border”. We refused. He got really mad. There was no information at the border office trailer, so we waited for a long time in the wrong line. He got even more mad. We got into the right line and got our stamps. He was still mad. We drove to the Chilean border, and learned that we would have to wait 3-4 hours, as Chile has really strict border control towards Bolivia and goes through every single passenger’s bags. Because we had been in the wrong line for so long, we where now one of the last buses to arrive. 😜

Some of the other tourists really freaked out over all the waiting, and some tour guides made a huge fuss about the restrictions on bringing food into Chile and the penalties for doing so anyway. Lots of others tourists where eating all their stuff and throwing things on the side of the road in panic. We declared our food, ate our carrots and dried fruit, and passed the border without any problems at all (besides Gitte getting two entry stamps. Let’s see what happens when we try to get out again 😄). An hour later we arrived in San Pedro de Atacama — our first stop in Chile.

After three very long days with amazing nature and many worries and frustrations we are now totally ready for Patagonia all alone with our rental car!