Our next destination was the Pamir Highway and the Wakhan Valley — both rural destinations in Tajikistan. The map bellow makes it easier to follow our adventures.

The first obstacle was to get there! In Osh, Kyrgyzstan, we found a nice driver, Ibrahim, who was about to head to Murghab, Tajikistan the following week. We agreed to take up two seats in his Land Cruiser, and got invited over for dinner the evening before departure. This was the starting point of a friendship (although one of those slightly odd ones where you pay your friend to do things for you 😉).

The dinner was a true cultural study, and we really enjoyed this opportunity to see Kyrgyz traditions in real life as well as the opportunity to ask a lot of questions about what life is like as a Kyrgyz with Tajik passport living in Tajikistan half of the time and Kyrgyzstan the other half.

Ibrahim is of Kyrgyz ethnicity, but grew up in Tajikistan during Soviet times in the village of Karakol, Tajikistan, where his father worked as an engineer to construct the Pamir Highway. Today he lives in Osh, Kyrgyzstan during winter and in Murghab, Tajikistan in summer, where he makes a living running a guesthouse and showing tourists around on the same road his father helped to build.

The drive to Murghab — the entry city of the Pamir Highway — was quite an experience. At departure day Ibrahim had found another three adults, his own 16 year old daughter, two kids, and a huge amount of food and commodities (which is so expensive in Murghab that they would rather take them the 400 kilometres from Osh). The trip was less awful than it sounds besides the kids vomiting at high altitude while the driver discussed the customs “fee” with the possible corrupt customs officers at the Tajik border crossing.

We spent a full day glaring at the amazing landscape that changed from beautiful green hills around Osh over high mountains at the border crossing to a moon-like landscape around Murghab. 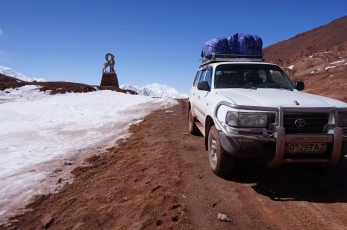 Crossing the Kizil Art Pass at the Kyrgyz-Tajik border.

Crossing the Kizil Art Pass at the Kyrgyz-Tajik border.

Murghab is located at an altitude of 3600 metres above sea level, so we decided to spend two nights there before continuing in order to acclimatize to the altitude. This gave us plenty of time to glare even more at the amazing landscape. It seems inhuman to place a village here, but as everywhere else in Central Asia we were constantly greeted by happy kids. We must admit, though, that it took a night or two to get used to the fact that Murghab has no electricity other than what you can produce with solar panels and generators, water comes from a well in the street, and your food is prepared over a coal or peat fire. 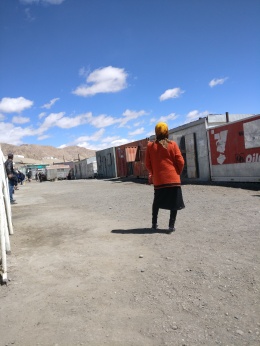 The bazar in Murghab — long rows of containers each containing a small shop.

The kitchen of our guesthouse as the big kitchen was not open yet.

Camping in the mountains

The next leg of our trip was the route from Murghab on Pamir Highway to Langar in Wakhan Valley. The route is the most deserted road we had yet seen. Therefore, we asked Ibrahim to take us there (this is where paying your friend comes into place). En route we saw stunning landscapes, learned the “tradition” of giving “gifts” to the soldiers at the checkpoints, and we got the first glimpses of Afghanistan which would be a continuing “neighbour” on our adventures through the Wakhan Valley. And we got another opportunity to ask Ibrahim many more questions about Soviet times, Putin, Tajikistan, life in Murghab, marriage in Tajikistan and what not. We learned that you can get a good wife for 1200 USD, 3 yak, and 20 sheeps 😉

Ibrahim also told us that there is a trek starting in Langar taking you towards Engels Peak, a 6507 meter high giant, and we of course had a look at our maps immediately. And indeed, according to the map there was a track all the way through the glacier to the top (which sounded a little too fantastic though). We decided to give it a try up until the altitude we were acclimatized to from Murghab.

It was a tough hike on the steep slope behind Langar on loose gravel, but then out of the blue after some 4 hours of climbing we reached a formed path next to a water canal built to lead water from the big mountain river to the next village as well. From here the hike became much easier, we met some shepherds and their sheep and goats, and finally encountered the amazing views of both the valley and Engels Peak.

Langar from above. The mountains on the other side are Afghanistan. 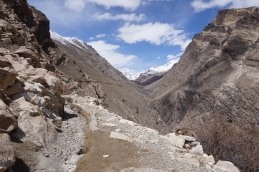 Finally reaching the path with a view of Engels Peak.

The loose gravel and steep slope ate our energy, so we decided to leave our bags behind at a camping spot and continue with less weight. However, we did not reach the lake we had planned to get a glimpse of anyway. We had to turn around to make sure to set up our camp before dark. Nonetheless we saw some amazing nature, and had a great night camping all alone in the mountains. 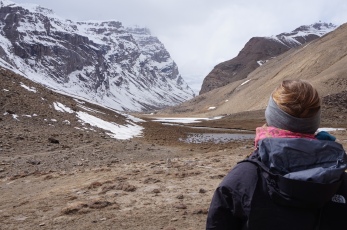 The meadows in the mountains are used as summer pastures for sheep and goats.

The camp side with a view to Afghanistan in the background.

Coming down from the mountain we started on the real route: Trekking from Langar to Ishkashim through the Wakhan Valley. 113 kilometres through rural villages at the border to Afghanistan. It was a huge experience! No matter were we went we were greeted by locals, invited home for bread and tea, and asked curious questions. When asked about your occupation you are expected to answer within the categories: Farmer, herdsman, driver, teacher or doctor. We usually answered “office-work”.

Our Russian phrases now include phrases to explain that we actually like to walk and would not like a ride, that we do not have time for bread and tea, and the main phrases to keep track of our hosts family relations as well as our own. And “no”, we do not have kids, and “yes” we are a little old for that 😉

The walk through Wakhan Valley was an amazing cultural experience. The Wakhan people live mainly from farming, but it rarely rains in Wakhan, and thus they are dependent on irrigation from the melt water coming down from the mountains. Everywhere in the valley you see water canals and pipes. People speak their own language called Wakhi, and confess to a branch of Shia Islam called Ismaili led by the Swiss-born Aga Khan, who supports life in the Wakhan Valley in every way. The Aga Khan Foundation provides free English courses to everyone, is part of almost every development project, and has the sole right to provide electricity to the Wakhan Valley for 25 years in return for building the infrastructure, including a hydroelectric power station near Ishkashim. During our days in the Wakhan Valley we met a lot of amazing people who made quite some impression on us.

In the small village of Zong we slept at a homestay owned by a lady who could tell us that her husband worked in Khorog (200 kilometres away) as they had no farmland. She herself had half a university degree from Dushanbe in German, but she was forced to return home during the civil war in Tajikistan in the 1990’s. Now she learns English 90 minutes every Friday at the local school together with other villagers aged 8-60 facilitated by the Aga Khan Foundation, who had also made sure that the village was not destroyed by starvation during the civil war.

We also met the school director Akim with a university degree in Russian from Moscow dating back to Soviet times. Now he was the director at one of the village schools in Vichkut. Most of his family was away working in Dushanbe and Russia, but a daughter and three grandchildren still stayed in the house. The extremely energised grandchildren loved to play checkers (Dam in Danish), and decided to challenge us. It turned out that Ulrik has some extremely strong checkers tactics, and we are pretty sure we left quite an impression on the young checkers players.

Akim and his family.

Ulrik playing checkers with the boys.

Besides the people, the Wakhan valley proved full of contrasts. Nowadays they have a stable electricity supply thanks to the Aga Khan Foundation, but they still get all water from a system of pipelines and canals distributing melt water from the mountains to a number of water fountains at select locations in the villages. We saw endless numbers of local men plowing their fields with two oxen and an oldschool tree plow. Without blinking the locals showed you the way to their “toilet” — an unstable stack of stones forming a breast high wall covering two holes in the ground. And yet, inside the mud-walled houses of our homestays we sometimes found fridges, computers, printers, and flatscreen TV’s. The Wakhan Valley is living evidence of what happens when people have lots of time but no paid jobs, and thereby very little cash. There is no room for making big investments, but a lot of time to do things the oldschool tough way.

Oxen waiting to finish a day of plowing. 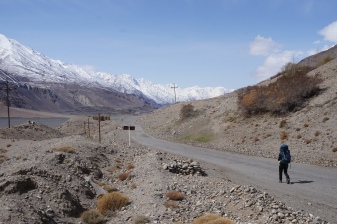 Our Wakhan adventures ended in Ishkashim were we deservedly relaxed for a full day before we found a ride to Khorog — the biggest city in the Pamirs and the capital of the Gorno-Badakhshan Autonomous Region (GBAO). Here we met the first Dane for ages! Andreas had been travelling alone for quite some time, but after warming up his Danish language skills we spent the afternoon exchanging travel tips and anecdotes in Danish! Pretty random to meet a Dane at the guesthouse, as we were the only three foreign guests there 😉

One Reply to “Wakhan Valley Adventures”