After some great weeks in New Zealand our time there was up and we wanted to move on. Next destination was originally Japan, however Australia was just on the way, and Gitte has a friend, Matt, living in Brisbane. So why not have a long weekend transiting in Australia before moving on.

As a true local guide Matt picked us up in the airport and took us straight for some sightseeing. We visited the lookouts around Brisbane, and went to the Lone Pine Koala Sanctuary to check out the local wildlife the easy way 😉 The zoo was great, and we came close to a number of the wellknown Australian animals – our best shots are inserted below.

Friday took us by the many popular beaches along the Gold Coast down to Byron Bay, where we walked up to the most eastern point of Australia and Australia’s most powerful lighthouse – and got a shot of a local rabbit as well 😉 Also, we came by some of the more desolate beaches and watched the heavy rainfall that hit us in Byron Bay leaving the coast. Here we got company from a lonely crab trying to get back to the ocean after the high tide. The coastline in Australia is just amazing! We honestly considered just staying there, learn to surf and hang out for the next 10 months 🙂 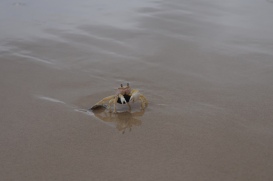 The highlight of our stay must be our trip to Lamington National Park where we did the 10 kilometre Box Forest Circuit. This trek took us by +1500 years old box trees – amazingly tall, many of then hollow inside, and just giant. As you may have guessed we could have spend a full day just admiring the trees (they are not suitable for climbing though…), but on the trek there were also some beautiful noisy waterfalls, a creek to cross several times, and a lunch to eat. And a tree top walk with a lookout placed some 30 meters up in a tree. All in all an awesome day, where we got Matt’s hiking boots out of the closet and had our crave for nature satisfied, so we can enjoy some big city explorations in Tokyo when we move on 😉

In the evening Matt had invited us over to his place for a barbecue, and as we arrived we realised that it included his sister and parents. They turned out to be extremely kind and curious about our trip, the country of Denmark, the crown princess and what not. We really enjoyed this opportunity to meet with an Australian family and come a little closer to what life is like in Australia. And Gitte were extremely relieved to hear that also the Australians are quite scared of all the snakes and spiders 😉

After this lovely and intense weekend in Australia we are now moving on towards Japan, slowly realising that this is our last flight until the beginning of May. Now the overland (and water) adventure begins.