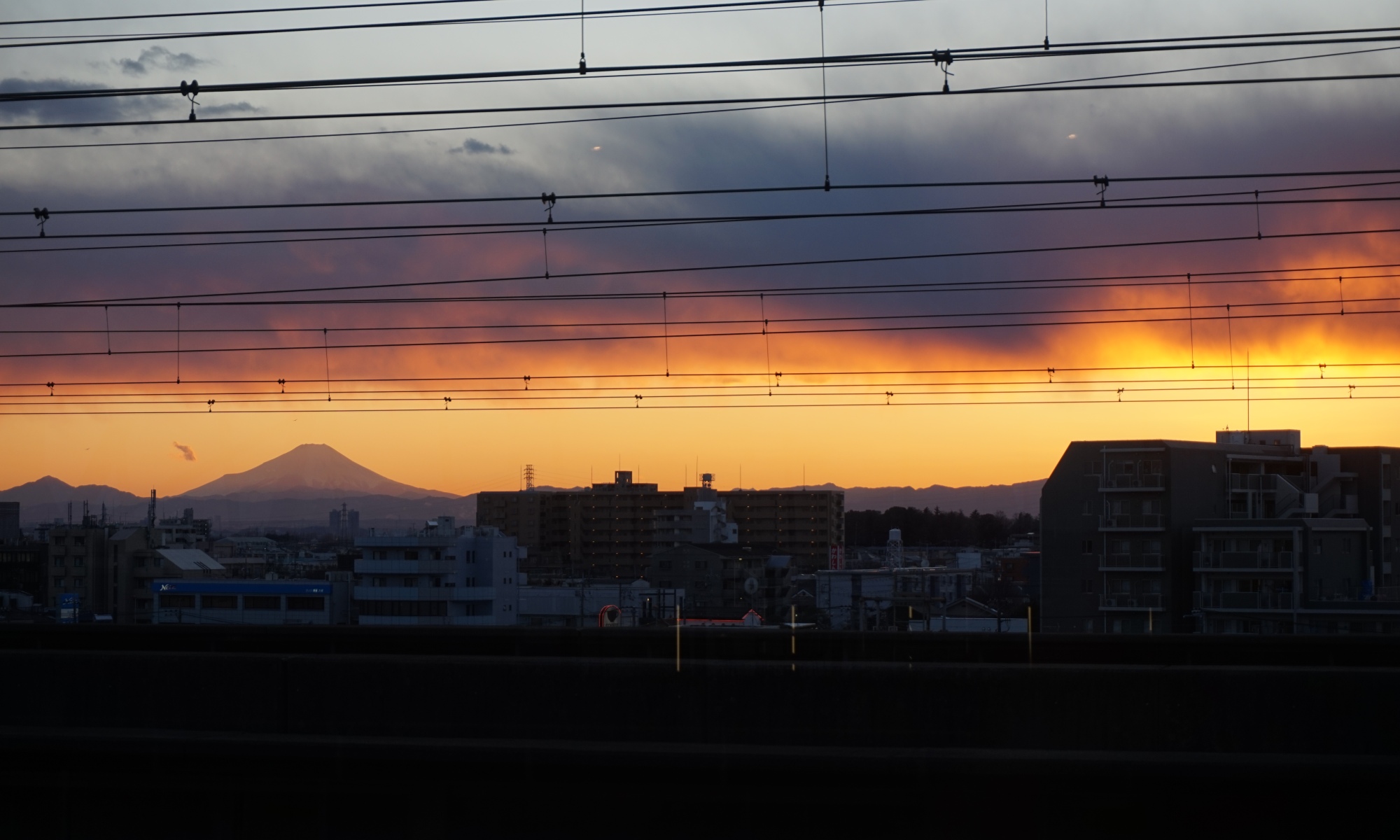 With a 9 hours QANTAS flight to Tokyo we left Brisbane, Australia, and summer behind. Tokyo welcomed us with around 0 °C, high-rise buildings, and plenty of neon light.

As we arrived with only dirty clothes, a dripping wet tent after intense showers the last night in Brisbane, and far behind on the planning side we took the first day off to sort out practical stuff at the hostel. As time passed we realised that it would be an all-day event, and headed around the corner for the local bakery to grab some lunch. Too late we realised that in Japan you do not eat as much bread as we do in Denmark, so we ended up buying a remarkably big amount of pastry and bread and received a plate as some kind of advert gift. A little embarrassing, but the pastries were lovely!

In the evening we stopped planning and went out to explore Tokyo. We headed towards the next door area Asakusa to check out Tokyo Skytree and Sensō-ji, a huge Buddhist temple. On our way we got some really great pictures of the skyline. 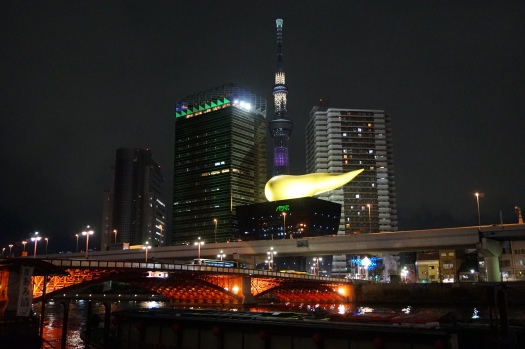 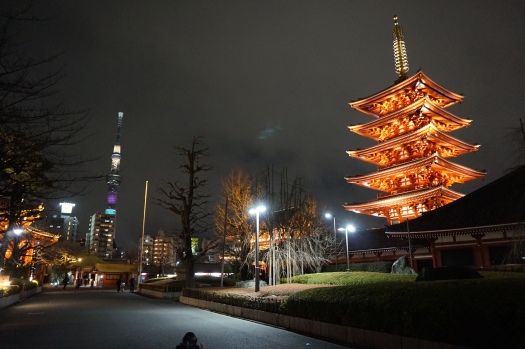 Our second day in Tokyo was set aside for a very specific attraction: Tokyo Railway Museum for which Ulrik received tickets as a Christmas present. And the museum was no disappointment. Japan has a proud railway tradition, and the museum showcased all types of locomotives and passenger cars in the history of the Japanese railway, starting with the very first steam locomotive imported from the UK in the 1870’s. The museum also showed some of the earliest electric locomotives from the 1920’s, and the development of the modern-day Shinkansen trains. We saw a demonstration of the big turntable in the middle of the museum turning a big steam engine locomotive from 1940 while demonstrating the impressive sound of the steam whistle 😲 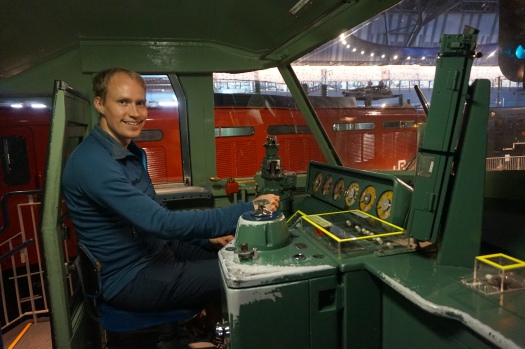 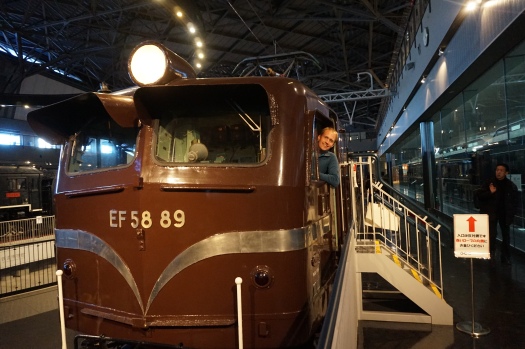 The museum also had a Science Station, where Ulrik could teach Gitte all about how trains turn in the curves, why steel wheels are better than rubber wheels, and how the trains avoid colliding on the tracks (Gitte may not have been as impressed as Ulrik). They had also set up a demonstration of an electric boogie complete with control board, brakes and motor control system, so that visitors could try to make the wheels turn and apply the brakes 😃 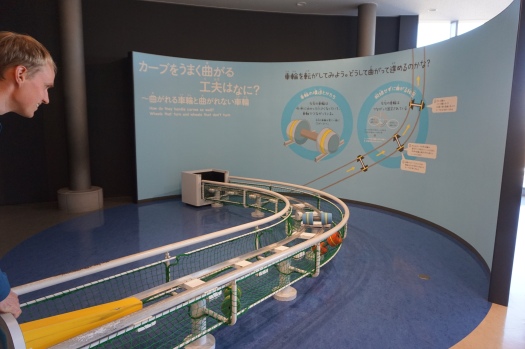 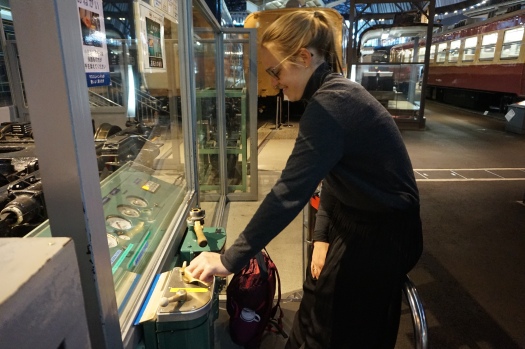 Tokyo is the largest metropolitan area in the world (almost 38 million people) which of course fosters other records as well. So we went for some “record sightseeing” and visited the world’s busiest pedestrian crossing with more than 1000 pedestrians crossing at the same time at peak hours. We also came across what is said to be the world’s busiest station with more than 3 million passengers every day. Here we had to find our night bus heading to Hiroshima. It took exactly 20 minutes, which luckily was the exact same amount of time we had planned for including buffer. Rumours go that night buses in Japan are horrible. However, we had a decent night’s sleep with Willer Express, so they get our warmest recommendations if you ever get the chance 🙂 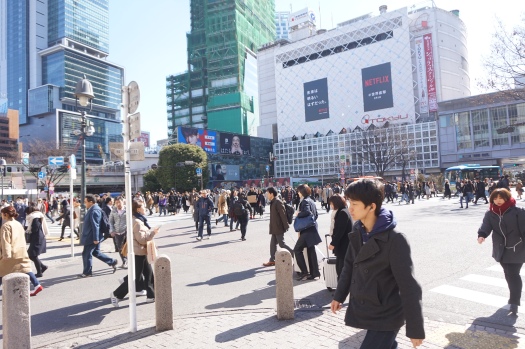 On this adventurous day we also went to a real sushi restaurant and tried real sushi. Record here must be the amount of fish that Gitte consumed. For outsiders not much, but definitely more than she has ever eaten before 😉 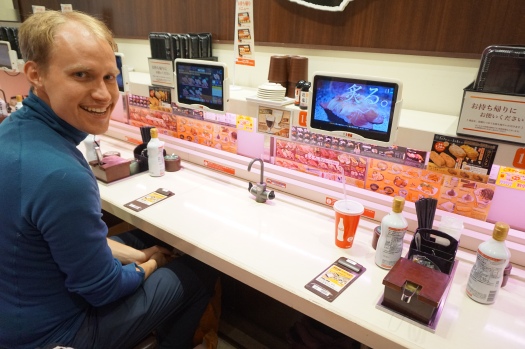 Our last discovery and recommendation for Tokyo is the Kakimori notebook shop were you can design your own notebook and have it handmade with just a little waiting time. Gitte was in love ❤️