Already on our way to Honduras we got a taste of how it would be like: Endless, delayed bus rides. Our tourist shuttle from Antigua, Guatemala to Copán, Honduras was first postponed 8 hours due to demonstrations in Guatemala City, and thereafter 1.5 hour delayed due to a traffic accident. But that is just Central America 😛.

Even with the delays we hit the border in time to get our stamps, and in the evening rain we found our pre-booked beds in Copán. We had only one thing on our todo list: Regain energy for another long bus journey!

We intended to go to Lago de Yojoa (Lake Yojoa): Apparently a pearl of nature in the middle of Honduras, and one of those off the beaten path destinations that have gained a lot of popularity and are no longer so “off the beaten path”.

However, the roads in Honduras all seem to be under construction, and the bus ride took about 8.5 hours making us feel that we would end up in the middle of nowhere. When we were dropped off in the rain and darkness in the village of Los Naranjos it did also feel a bit like we had made the journey to the end of the world. This feeling soon disappeared, though, when we found our end destination: D&D Brewery. Nothing like “off the beaten path”, the restaurant was full of guests and a lovely staff member greeted us and informed that we had arrived just in time for placing the last order at the restaurant, before it would close for the evening. So just like that an awful day on buses ended with a lovely meal and a home brewed beer at a jungle lodge in Los Naranjos.

The aim for going to this far away place was to enjoy the nature. We packed a day-pack and set off for some kayaking on Lago de Yojoa. The cheapest option was to rent a double kayak. However, we had not considered how difficult it actually is to steer a double kayak 😛. It took about 20 frustrating minutes to learn how to paddle without hitting each other and/or making the kayak turn around. After the initial problems, though, we had an amazing morning on the lake almost alone.

On our second day we went to the nearby “Bioparque Paradise” — a coffee and cocoa plantation which is also a small nature reserve with orchids, toucans, and some ceremonial Lenca sites still in use by the indigenous population in the area. 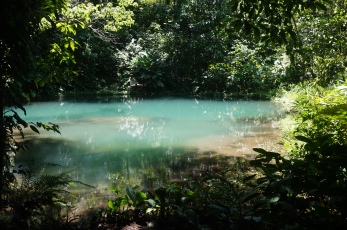 The highlight of the day, though, was when a couple of friends from our hike in Guatemala arrived to D&D’s as well, and we enjoyed an evening of lovely food, home brewed beers, and exchanges of travel tips and destinations.

Eight years ago, Ulrik had volunteered in Honduras, so obviously we wanted to go see the town he lived in back then. Gracias, here we come! Or not so much. It turned out that the easiest way from Lago de Yojoa to Gracias involved at best three different busses — at worst six. We decided that we would better start early!

Starting early proved to be a very good idea. Mainly because that meant that an American expat eating breakfast heard us ask the receptionist about some last advices for our bus adventure. He happened to live somewhere in that same direction, and he offered to give us a ride for more than half of the route, until the point of the last bus! He definitely saved our day 🙂. And on top of that, we had some great hours in the car learning about Honduras from the eyes of a semi-local.

Gracias was also very much off the beaten path. It seemed we were the only tourists in town, even though the town is the biggest in the area. That suited us fine, and Ulrik showed Gitte around the town to his different hangout spots from his days as volunteer. The town had developed and grown quite a lot since then, which felt kind of surprising as Honduras is not exactly known for moving that fast.

Since Ulrik was in the area last time the nearby La Campa village had also developed. For some reason they have built Central America’s highest zip-line! There was only one option: We had to go try it! It doesn’t really seem to be a huge tourist magnet yet, though. Maybe because the bus journey there took 90 minutes, even though it is only 16 kilometres away from Gracias!

When we arrived the first task was to find the people running the zip-line. After having walked around the village for 10 minutes we found the office, but then had to wait another 10 minutes for them to feel like having customers… However, the zip-line was indeed amazing! It consists of six different zip-lines criss-crossing back and forth over a canyon. At the highest point you are 380 meters above the bottom of the canyon!

After the adrenaline kick from the zip-line we decided to go to the local evening hangout: A hot spring a little outside of town. It was great to relax in the hot water! Although we may prefer it in cooler weather 😉.

Our last stop before heading back to Guatemala, and from there heading out of Central America, was the ruins of Copán: Our very final Maya ruins. We went there early morning to avoid the crowds, and had the place almost for ourselves. Or we had to share with the many animals inhabiting the area. So when Gitte tried to figure what was what, Ulrik got some great shots of the scarlet macaws 😉 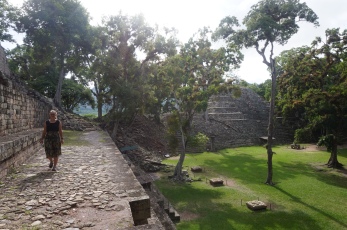 Macaws and a squirrel.

That was it. Our eight weeks in Central America ended with a full day in a tourist shuttle, as so many other days during our stay. We kind of liked it: The friendly people, the interesting wildlife, the beautiful volcanoes. We kind of hated it: The hot and humid climate, the awful roads, and the many extremely touristed destinations. But one thing is certain: We have now embarked on the last leg of our adventure, as they wouldn’t let us board a plane to Ecuador without a ticket out of South America. So in the airport we booked a ticket back to Europe for early December 🙂.