Our African adventures came to an end, and our next stop included visitors from home: We went to Mexico to have two weeks of vacation with Gitte’s sister Rikke and her friend Sylvia.

We all met in Mexico City which, despite being among the world’s biggest cities, was surprisingly welcoming and friendly. As we came almost straight from a small village in Africa we had got quite used to greeting just about everyone greeting us, and to the horror of Rikke and Sylvia we continued this habit in Mexico City. Whether appropriate or not in Mexico City, we have by now learned that most Mexicans are curious and friendly — and do indeed greet fellow citizens along with foreigners walking on the street. We soon got our “buenos días” and “buenas tardes” in place to respond just as kindly 🙂.

In general Mexico kept surprising us during our month there. First and foremost, Mexico’s bad reputation had of course caused us many thoughts about our safety when travelling there. However, we experienced absolutely nothing like the bad stories you may hear of busses being robbed, express kidnappings and the like. In fact we found that not even the taxi drivers tried to cheat us (which kind of made us very suspicious about their intentions! 😛).

Another surprise about Mexico was the vast amount of possible things to do. It was like every city had its own precolonial ruins, and/or bastions from the colonial times, a central city area with beautiful colonial buildings, a few beautiful cathedrals, and either some fabulous nature trails to hike, some waves to surf, or animals to experience. It made it a very hard choice for us what to see and do, and specially where to go and what to spend our money on! We kind of ended up doing a bit of everything 🙂.

Indigenous cultures and the many ruins

We started our exploration of the many indigenous cultures and their impressive buildings already in Mexico City. First we went to Templo Mayor, an archaeological site in the middle of the city. It was built by the Aztecs on an island placed in a string of lakes, a few hundred years before the spaniards arrived. We were stunned to learn that Mexico City is basically built on top of a huge wetland area and that the underground is struggling to support the weight of the huge metropolis.

We went to the National Anthropological Museum, where we were lucky enough to hit both a free entrance day, and a free guided tour in English. The lovely guide made us realise that indigenous people in Mexico are not just one big group — they are multiple different groups of people who fought against each other, took over each others territory, and not least: The city state empires had their heydays at different points in history. Food for thought for the ignorant Europeans 😉.

During our stay we got to see Teotihuacán, the ruins of one of the biggest cities to exist in Mexico before the Spaniards arrived — and before the Aztecs started ruling huge parts of the country. Here, the world’s 3rd largest ancient pyramid was built around year 200 AD — absolutely stunning!

Pyramid of the Sun

On top of Pyramid of the Sun

The view from the Pyramid of the Sun

The Temple of the Feathered Serpent 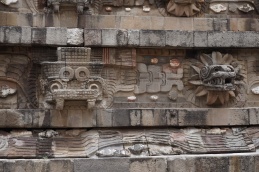 Diety figures on the Temple of the Feathered Serpent

The two pyramids as seen from the Citadel

However, we soon learned that those indigenous Mexicans were some incredible architects with a huge knowledge of astronomy helping them to predict the seasons using a very detailed calendar based on the movement of the sun and the moon. We went to the impressive Maya sites in both Palenque, and Chichén Itzá and were equally amazed by the impressive structures and appalled by ignorance among the European conquerors back in the 1500’s. And a little surprised how little we actually knew about this topic… 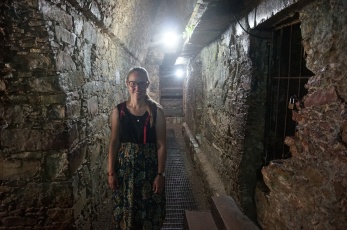 Gitte next to the tomb of the Red Queen, Palenque

Temple of the Inscriptions, Palenque

Temple in the jungle, Palenque

Gitte walking in what was once a gallery of the Palace, Palenque

Under the Palace, Palenque

Gitte in front of the Thousand Columns, Chichén Itzá

The Temple of Warriors, Chichén Itzá 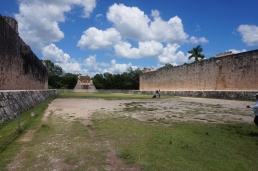 An Iguana in front of Las Monjas, Chichén Itzá

Besides the many ruins from indigenous populations, the Spanish also ensured their share of current tourist attractions, although their purpose was very different back then. After some very warm days on the Pacific coast we felt like permanent heatstroke and decided to head to a colder place. Local advice told us that San Cristóbal would be much more temperate, so we jumped on a night bus and woke up to what felt like ordinary Danish summer 😁. The reason was the altitude, and we where thrilled to finally get rid of the constant “don’t feel like doing anything”-feeling we had at the ocean. We soon learned that the Spanish conquerors may have felt the same — at least, according to local rumours, the reason why the Spanish decided to build a city at this altitude was that they did not like the heat either 😉. So in the mountains we found a cute little colonial city, and as in many other places it was full of pastel coloured houses and grid-like streets. 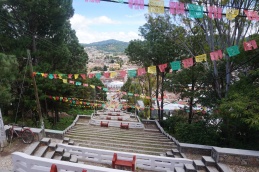 The same goes for Campeche, and to add to the colonial feel there is also a huge city wall with bastions, and outside the city we found a fort built to protect the “New Spain” from pirates.

The Land Gate of Campeche

The Sea Gate of Campeche

On the roof of Baluarte de la Soledad

Gitte on the city wall

The drawbridge at the Fort of San Miguel 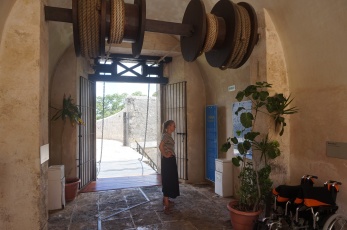 Inside the Fort of San Miguel 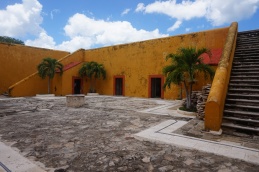 The courtyard of the Fort of San Miguel 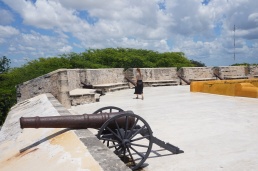 On top of the Fort of San Miguel 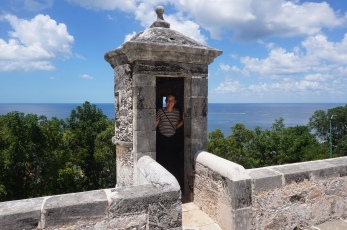 Gitte in a lookout tower at the Fort of San Miguel

The moat at the Fort of San Miguel

Out on the hiking trail

With Rikke and Sylvia we decided that we wanted to go hiking somewhere. However, we did not find many multiple-day hikes advertised, so we had to dig a little bit around. In this research we came across Pueblos Mancomunados (Commenwealth of Villages) in Sierra Norte, just a short drive outside of Oaxaca. It was perfect! Reachable by bus from Oaxaca was a network of villages connected by (hiking) trails, and in each village they had a tiny tourist office to set you up with a place to stay in a local cabãna and a guide to show you the way the next day.

With some help from a nice tourist information officer in Oaxaca we got the details confirmed, and soon we headed off to Cuajimoloyas — a small village in the mountains. It was absolutely quiet, clean, pleasantly cold, and relaxing!

The next morning we started our trek: A days hike to the village of Latuvi. We started out in the morning with a lovely local guide, walking on a relatively flat path in the pine woods, and enjoyed some amazing views of the Mexican highlands. At lunchtime we were met by a guide from Latuvi, who would take us the rest of the way, so our first guide was able to get back in time for dinner. Kind of a clever setup. The new guide was probably in his sixties, and soon we learned why he had been a little delayed. The rest of the trek was really tough as we did a steep decent into a valley, and afterwards and equally steep ascent to Latuvi village.

However, we made it and were treated with fabulous views from a local viewpoint and the view from our cabãna. 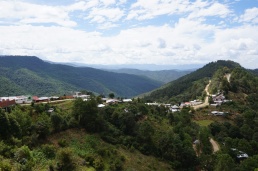 We ended our day in a small local comedor operated by four generations of women from a local family. This part of Mexico seemed so different from what we had seen in Mexico City — and from all the bad stories we had heard.

Unfortunately, Rikke had a bad stomach ache for most of the night before and during the full hike, so we were all a little concerned when we went to bed. It persisted over the night, and in the early morning we all agreed to change our plans and get back to Oaxaca, so she could see a doctor. Ulrik dusted off his Spanish and took on the challenge of explaining our guide that we needed help to get back to Oaxaca, and not help to find our way to the next village. He succeeded, and the guide was really lovely and found us a local “taxi” that could take us to the main road, where we should be able to get a bus. The bus part proved difficult, but some kind of bus service run by a pickup truck finally picked up the four of us with our backpacks, and after a few hours we where back in Oaxaca.

It turned out to be a good decision, as they kept Rikke in the hospital for a few days. We got to see a little more colonial buildings in Oaxaca in between keeping Rikke with company, grocery shopping, and changing reservations.

In the water and the many animals

With Rikke out of hospital it was time for a new type of Mexican adventure: Tropic beaches, surfing, and swimming! We headed to Puerto Escondido, a small surfer’s paradise and Rikke, Sylvia, and Ulrik got their first surfing experiences 🙂. 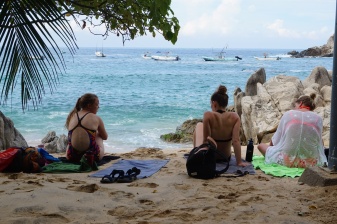 To get a close look on the local turtles and dolphins we went on an early morning boat trip to try spot them. Unfortunately, the three Danish “vikings” where not that much vikings when it came to sailing, and Rikke, Ulrik, and Gitte where all spending a good portion of the time hanging over the side of the boat making “offerings” to the ocean. Poor dolphins! And therefore also a terrible lack of pictures of the amazing animals. 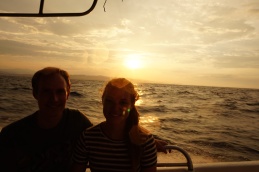 To get rid of the bad experience we also decided to go for a late night trip to a nearby laguna with glowing plankton. An absolutely amazing experience!

We kind of liked the many animals, so when we found a jungle lodge for a decent price near Palenque, we decided to go get a closer look on the jungle and the animals there. We did not get to see anything but mosquitoes, but the local gang of howler monkeys made sure that we knew they were there, and did not allow us much sleep! Incredible how much noice they can make 😛.

However, we forgot all about it already the next day when we first went to see some very cool water falls (Aqua Azul and Misol Há), and checked in on our next hostel to learn that they “unfortunately” had to transfer us to their neighbouring hotel, as they needed to do some maintenance on the hostel. Perfect! 👍🏻

The cave at Misol Há

A waterfall inside the cave at Misol Há

We ended our stay in Mexico with finally learning what a cenote is. Apparently, it is the water hole that appears when an underground cave collapses due to erosion of the limestone that constitutes most of the Yucatan peninsula, and they are then filled with freshwater. What a lovely way to cool down in the immense heat! 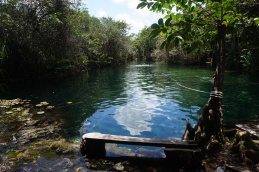 As a “good bye to Mexico” treat we went to the “best place in town”, “Many’s” recommended by the lovely hostel owner we stayed with in Tulum. It turns out that Many indeed makes the best tacos in town. However, he sells them from a street food stand at a street corner. We went to the local Oxxo to buy a beer while he fried the meat for our tacos 😄.

Now we are in Belize and will soon update you on our adventures in this tiny country with as many inhabitants as people living in our hometown Aarhus 🙂.