After more than four months in Asia we have moved on to Africa, where we have two main appointments: Five weeks as volunteers in Malawi and an attempt to trek Mt. Kilimajaro i Tanzania. But before we devoted ourselves to the ruralness of a small village in Malawi we decided to hit some of Africa’s top attractions.

Already in the plane from Nairobi, Kenya, to Victoria Falls, Zimbabwe, we got a taste of what was ahead of us. We both got an impressive view of Mt. Kilimajaro and Victoria Falls from above.

At our day of arriving in Victoria Falls, Zimbabwe we managed to arrange for a safari tour to nearby Chobe National Park located in Botswana already the next day. So on Gitte’s first full day ever in Africa we went on her first ever safari — and it was a huge success. Chobe National Park is absolutely amazing this time of the year, as most of the animals come to the Zambezi river and its side rivers for water and food, so there are literally animals everywhere. At the same time there are still quite much water in the river allowing the small boats to go pretty much anywhere.

In the morning we went on a river safari in a small boat on the Chobe River, and in the afternoon we went on a game drive around the national park. The pictures speak for themselves. 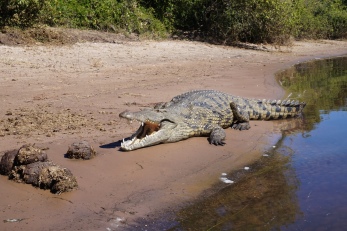 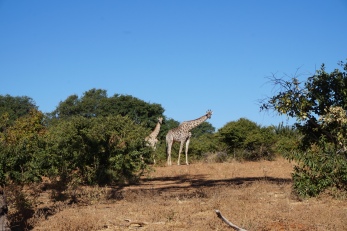 We dried our things and decided to move on to Zambia that same day. As we crossed the bridge forming the border between Zimbabwe and Zambia we got a good taste of what waited for us on the Zambian side.

So we once again went to the Victoria Falls National Park — but this time from the Zambian side. We had an amazing day of exploring the falls from various viewpoints and from different angels. We did get soaked once more, but this time it was worth it 😉

Seing the Victoria Falls is not so much about the actual sight, as it is about experiencing the loud noise from the water falling down, the insane amount of mist in the air as some of the water is thrown into the air, and the heavy rainfall as the water comes down again.

Now we have found our way to Malawi and are slowly getting into the rutines of the help2kids projects we work for as well as the slow pace of life in a small village. So far Ulrik has measured around 150 babyes, Gitte is totally on top of noting down in the children’s “health passports”, we have played with a lot of kids, learned a few words in the local chichewa language, and we managed to teach a group of kids to play “Stratego”. 😉

One Reply to “Wildlife and Loads of Water”