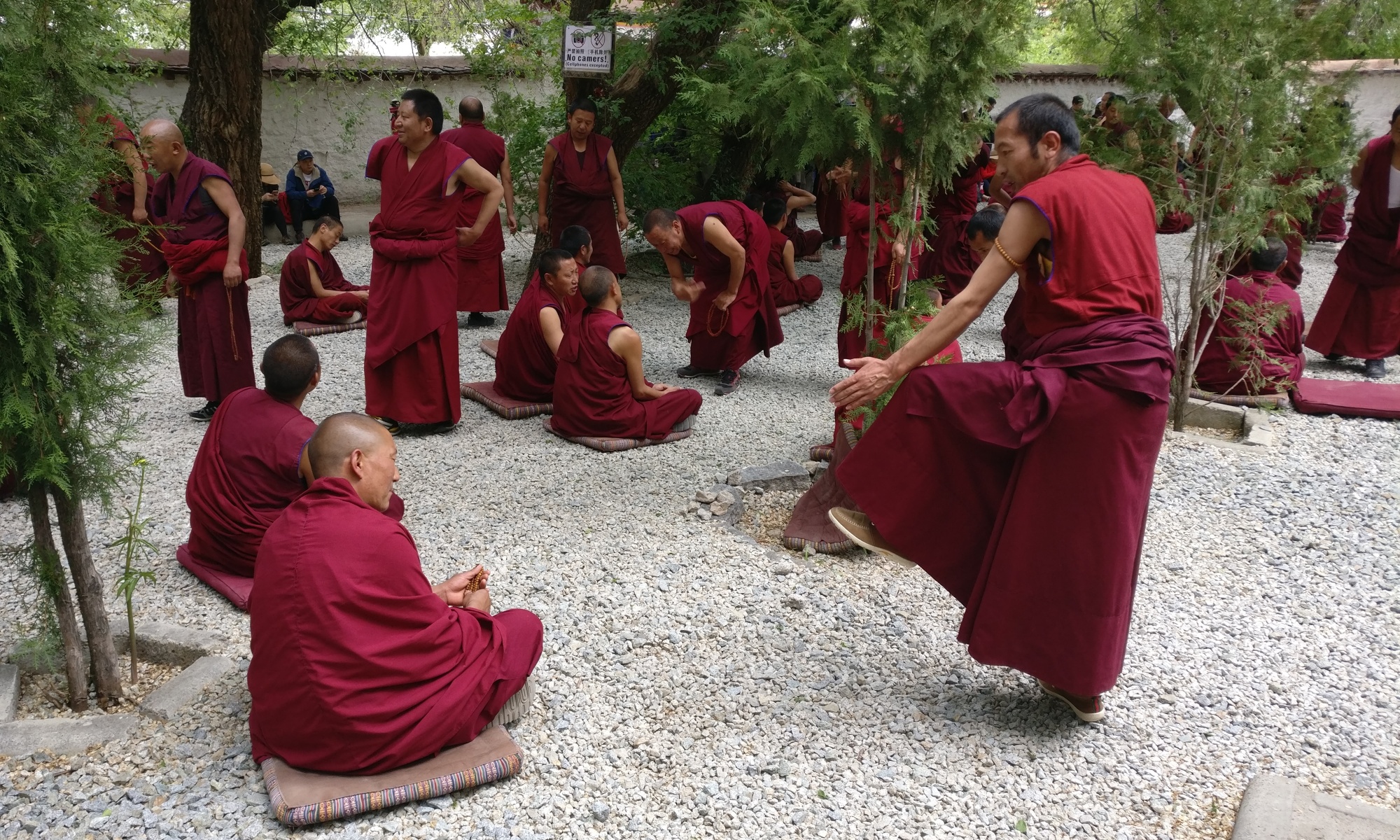 Besides our walk around Mt. Kailash, our aim for visiting Tibet was also to better understand the strong spiritual power of this high-altitude region so far from everything else. After meeting pilgrims prostrating around Mt. Kailash our curiosity was even bigger — but we have to disappoint you, we have not found many answers. We have just increased our understanding a little bit 😉

Already the day after finishing our Mt. Kailash trek we joined the Saga Dawa festival celebrated in Serxiong, a spot in a broad valley in front of Mt. Kailash. There was a huge security setup arranged by the Chinese government including a meeting between the police and all tour guides hosting foreign tourists to inform about all the specific rules in place for tourists (that is another cultural exploration 😉). But besides that, it was a great window into the Tibetan culture.

Saga Dawa is celebrated by the whole buddhist world, and it celebrates Buddha’s birth, enlightenment, and death/attaining of Nirvana. In Serxiong the event is evolving around raising a big flag pole full of prayer flags. 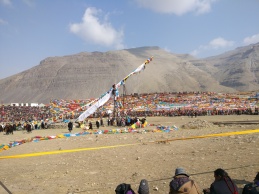 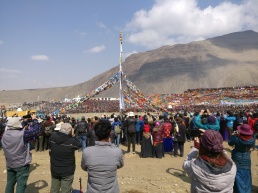 We did not understand much of the whole thing, but we saw a lot of locals — and they were all happy and smiling, so we anticipated that it was a great day for them 😛

Our tour continued towards Mt. Everest, and along with this came new cultural experiences. Near the foot of Mt. Everest we encountered the Rongbuk Monastery, where they still celebrated Saga Dawa with performances by the local monks. Unaware of this we entered the monastery, and found ourself glaring at these amazing costumes and the insisting drums accompanying the performance. 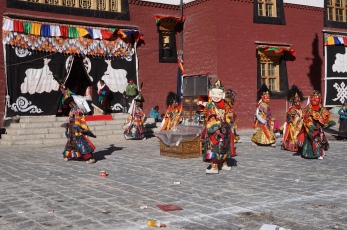 Still, this whole buddhism thing appeared difficult to understand, and after a while we went out to take some pictures of Mt. Everest instead. 😉 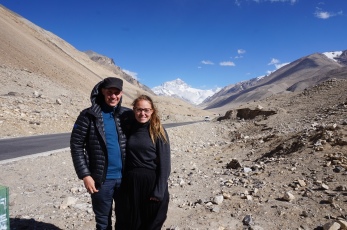 The next day we continued to Shigatse, the second biggest city in Tibet. In the evening we went to a small local restaurant with the four other tourists in our tour group. The owner was truly exited to have us in her restaurant and did her best to explain us what was on the menu. It proved impossible with our non-existent Chinese/Tibetan and her non-existent English, so she took us to her kitchen and simply showed us what she could cook 😛 We ended up with a mix of dumpling soup and noodle soup.

While sipping our Lhasa Beer and waiting for the food to cook, an elderly Tibetan man came to our table and gestured whether he could take a picture of us. It is not unusual that locals in Tibet find foreigners so special that they want a picture of them, so we said yes and all smiled at his phone. When the food arrived he came to our table again and told us to spin the soup with our spoons. Gitte made the big mistake of spinning her soup anti-clockwise, and the poor man got a desperate look on his face. That is how we learned the importance of doing everything clockwise 😛

Shortly after he came to our table again — and paid all of our food and drinks. We were confused and tried to ask him not to (after all, we expected us to have more money to pay for it than him), but he insisted, took more pictures, and left us with a big smile on his face.

The next day our guide, Tenzin, had overcome his discomfort at high altitudes, and he stepped into the role of our Tibetan/buddhist expert. He turned out to be an incredible source of knowledge when it comes to buddhism, and Tibetan buddhism in particular.

This month in the Tibetan calendar is the big month of giving — and any good deed will come back enhanced in your next life. This was probably the reason for the elderly man paying our dinner (although we are not sure whether our concept of a good deed is to pay dinner for tourists — more on that later 😉).

In Shigatse we went to see the important Tashilhunpo Monastery, seat of the Panchen Lamas (next level after the Dalai Lama). Unfortunately, we were (as always in Tibet) only allowed to take pictures outside the monastery. 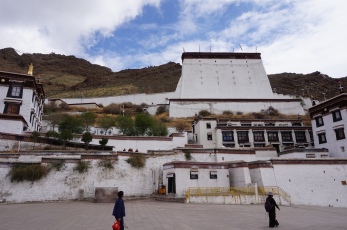 Here, Tenzin began his effort to learn us to distinguish between the many buddhas — the past, current, and future Buddhas, Buddha of Compassion, Energy, and probably even more. We are still not entirely sure whether these many Buddhas are to be considered different Buddhas or different faces of the same Buddha 😛 Along with this he tried to give us an overview of the many statues of Indian masters, yogis, protectors, disciples, and former and current Panchen Lamas. We were extremely confused, but started to see the differences.

Along with this he gave us loads of information about how the many local pilgrims were offering buckets of yak butter and piles of small money to all the statues, spinning their prayer wheels, and meditatively humming in all the chapels.

He continued his effort in Gyantse when we went to the Pelchor Monastery and the nearby stupa. Here, we again found locals just finishing the Saga Dawa celebrations of the day — and we did some repetition of all the buddhist figures. 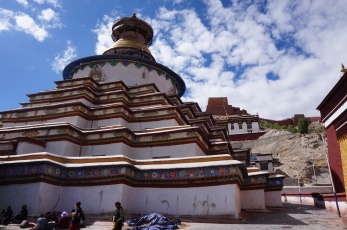 After Gyantse we headed towards Lhasa, the capital of the Tibet Autonomous Region, and the seat for the Dalai Lama, although he “rules” Tibet from his exile in India.

The first place Tenzin took us to was the Jokhang Temple and the surrounding Barkhor streets, another Kora — this time just around the Jokhang Temple. Here we found a bunch of pilgrims prostrating around the temple in the rain, along with surveillance cameras hidden in the street lights and disguised as prayer wheels, together with souvenir sellers and a whole lot of police.

Tibet is full of contrasts, and for sure governed more by the Chinese than the Dalai Lama. We kept asking Tenzin questions about this and buddhism, without coming much closer to understand what this was all about. 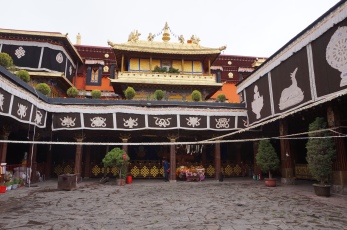 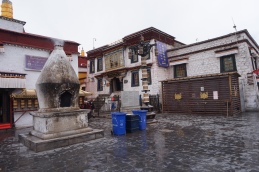 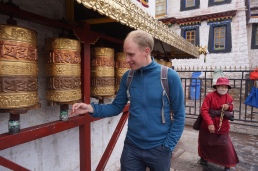 The next day Tenzin took us to the Drepung Monastery, once the biggest monastery in the world with more than 7000 monks at it’s peak. Today there are only about 300 monks. While we were there all the monks were called to assembly in the big assembly hall, and we experienced the big “tea run” back and forth between the kitchen and the assembly hall for everybody to have their offering of sweet tea. 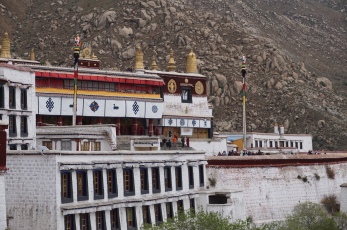 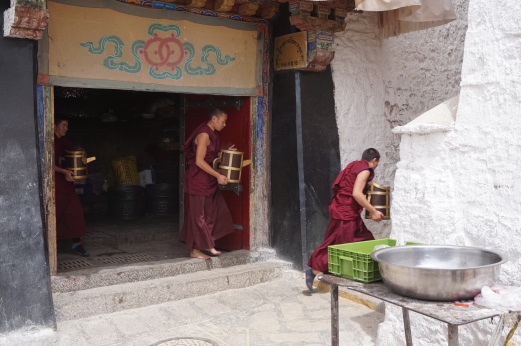 Tenzin took us to the assembly hall to see the big ceremony. Due to the celebration of Saga Dawa this was one of the main ceremonies during the year, where monks and locals donate money to the monks individually.

During our visits to the different monasteries around Tibet we had seen huge amounts of big and small notes, expensive yak butter burning in lamps, fruits on display, and bread being offered to all the different Buddhas, protectors, masters, and pretty much anything else existent in the monasteries. But the ceremony we came to see gave a whole new understanding of how much money is circulating in the monasteries.

For the best of half an hour queues of locals and some monks passed by each and every monk in the assembly hall and gave each and every one some money. Most gave 1-5 yuan per monk, but many gave more, and we even saw a nun giving each monk 50 yuan, and a monk giving each 200 yuan. There were probably around 300 monks in the assembly hall, so the last monk probably gave away the equivalent of more than USD 9,000 or almost DKK 60,000. We were confused — and still tried to absorb the absurd amount of money we had just seen changing hands. Tenzin even told about a business man once giving 10,000 yen to each monk.

We learned that the average monk most likely “earn” more than the average Tibetan, that it is all about “giving” to get good karma in return and being reincarnated as something good in your next life. If you keep what you have, you will most likely not be reincarnated as something good, according to Tenzin. Many Tibetan families have at least one monk supporting the family financially.

But why not give to humanitarian causes then? Why give to the monks and monasteries? For this, there was not really a clear answer besides that it was always difficult to decide what was a good cause. Tenzin gave us an example: If you give $100 to a homeless, you can never know whether he would just spend them on getting drunk, and thereafter kills another person — and in that way you would end up contributing to something bad. Furthermore, things like schools and hospitals were in his opinion a government task, and not something locals could influence. And, by the way, you can always donate to charity in your next life 😉

It was hard to understand (and accept), the relative poverty of Tibet taken into consideration, but at least it made us understand that the society we know from Denmark build heavily on Christian values and a Christian logic no matter how (little) religious Denmark appears today. For the Tibetans everything is about good karma in their next life, not this life, and “giving” seems to be more about giving to the different figures (alive and statues) in the monastery rather than (the Christian way of) giving to your “neighbour”. Our best conclusion is that it is very difficult to understand, as we have grown up with a totally different logic of life 😛

We had some great dialogues in the group and with Tenzin, and enriched by this we went to the Sera Monastery in the afternoon to see the daily monk debate. This was an equally culturally rich ceremony, where the many monks discuss the curriculum of the day. They discuss buddhist topics like “emptiness” and “the middle way”, following a set script: The standing monk asks his questions, and then “clap” his hands — and the sitting monk are to answer. If the standing monk is not satisfied he can ask further questions. The debate can get quite heated! 😛

To round off our time in Lhasa, Tenzin took us to the famous Potala Palace, which was the residency of the Dalai Lama before he went into exile in India. However, this important site has turned into a true mass-tourism hell so full of tourists and with so tight time restrictions that you do not get to see much. However, Tenzin did his best — explaining things while waiting in lines for the next room. And as a more low-key experience we encountered a group of Tibetan women from a village humming prayers through all the rooms setting a much more authentic scene than the horde of loud tourists from mainland China. 😉 And we did get some great pictures of the impressive building from the outside (pictures not allowed inside, along with water bottles, matches, and bottled oxygen 😉). 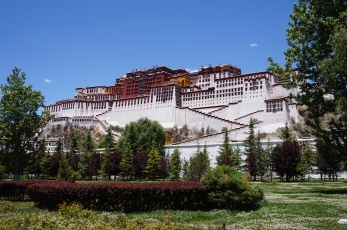 Our time in Tibet is up, and we have now only one last thing left for our exploration of Asia: A trip with the world’s highest railway! Thereafter, we will change continent and start exploring Africa.