Reaching Ulan-Ude — the capital of the Republic of Buryatiya — we had actually reached Siberia, but we wanted to get out of the city and see the world’s biggest lake (by volume) all frozen. Therefore, we set out from the hostel to find the bus station and buy tickets for the morning bus to Ust-Barguzin, a village at the eastern shore of Lake Baikal.

As we would soon learn maps in Russia seems to be more or less inaccurate, so we did not find the bus station in our first attempt. However, we found an outdoor market (what?!! It’s -20 °C!) and bought isolating insoles for our boots, as it was just pretty damn cold in Siberia!

Back at the hostel we got another map leading us to the right bus station – and guess what: Gitte managed to buy bus tickets only in Russian 😀 With the transportation in place we enjoyed some sightseeing in Ulan-Ude, and as the temperature slowly increased to -15 °C it became almost okay to be outside for a short period of time 😉 For lunch we got all kinds of Buryatiyan specialties of meat in dough, and we started to feel quite at home in Russia.

The next day we took the public bus to Ust-Barguzin, and again we learned that you cannot rely on any kind of information you find in guidebooks about Russia. The bus was only 4 hours, not 6 as expected, so the “lunch stop” was more like a second breakfast. This did not stop the locals from eating mashed potatoes with goulash – we preferred some bread 😉

When the driver stopped somewhere in Ust-Barguzin and everybody got off the bus, we thought it was our hint to leave the bus as well. We headed for the pre-booked guesthouse by foot, and soon found the address. But the house had no signs of being a guesthouse – and had a really angry dog barking whenever we tried to take a closer look. We tried the bell quite a few times, but nobody came to open. After confirming with a local on the street that it was the right address, and realising that we were about 1 hour early for the official check-in time — as the bus was faster than expected — we decided to take a walk in the area instead of waiting outside in -17 °C. We left our big bags on the doorstep and looked around in the beautiful little village. Soon after the walk the lady of the house found us on the doorstep and warmly welcomed us inside.

She spoke only a little bit of English, but soon started asking us what we would like to do in the area. It turned out that you cannot really do anything on your own in winter, but she promised to talk with her husband — who is the big octopus coordinating all tourist tours in the area — whether there were any tours we could join during our stay in Ust-Barguzin. With that promise she started cooking our dinner: Oven-baked omul (a kind of fish only living in Lake Baikal). Even Gitte — who does not like fish — was a fan of omul (or maybe just fresh fish cooked by a good cook), which was lucky as it turned out to be “omul week” in the guesthouse; we got omul for dinner four days in a row, and even for lunch one day.

On our first day in Ust-Barguzin the guesthouse managed to get us on some kind of logistic drive across Lake Baikal all the way to Olkhon Island on the western shore. It seemed the drive was only there to take one tourist to Olkhon Island and another four back. But the car was a big old Russian military van with empty seats, so why not let us drive with them back and forth. This turned out to be an amazing experience driving in total about 100 km on the frozen Lake Baikal seeing all kinds of ice formations and ice cracks.

We were taken across Lake Baikal in this old Russian military van.

The ice is changing all the time, cracks open and close. 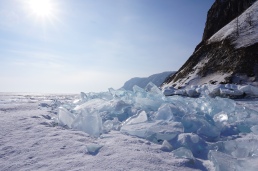 The shore of Olkhon Island breaks the ice. 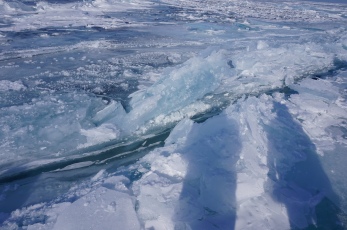 Thick crack just opened, the water is not frozen yet.

When the ice is clear it gets a deep black color because of the deep lake.

Holy Nose Peninsula in the background. 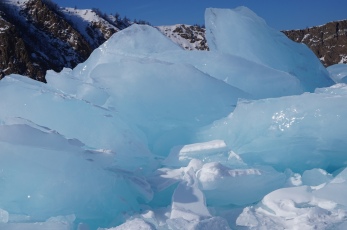 On our second day there were no tours for us to join, so we were left for our own creativity. As we had already seen the village on the day of arrival we wanted to get out in the forest or to the lake. We tried to ask whether we could rent skis somewhere, but they did not really understand what we meant. Instead we decided to take a walk. It turned into a day hike with picnic, plenty of chocolate, hot tea, and lots of snow and ice! The 15 km in snow and sub-zero temperatures were really tough, but the nature at the shore of Lake Baikal is just amazing no matter how tired you are 😀

On our third and last day we could join a tour with a french couple to Zabaikalsky National Park with visits to the Svyatoy Nos (Holy Nose) Peninsula, a hot spring, ice caves, and a community fishermen’s house on the ice. The french couple was great, the weather was amazing, plenty of great photo opportunities, and in general it turned into a really great day.

This place is even more touristy in summer. 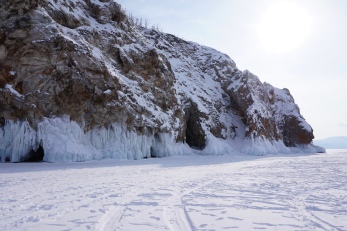 Fishermen can stay in these heated huts for weaks at a time fishing Omul.

Fishermen can sit on their bed and fish all day through holes in the ice.

This marked the end of our stay in Ust-Barguzin. The next day we woke up at 04.45 to catch the morning bus back to Ulan-Ude. We left the village in the dark in -30 °C, and were already preparing mentally to travel on towards Omsk (another two days in train) and later Kazakhstan.

In Ulan-Ude a nice surprise were waiting for us: At the hostel an Austrian guy we met in Korea, who also took the ferry with us to Russia, had just checked in. We spent the rest of the day chatting, exchanging stories, and sharing travel tips about future destinations with each other.