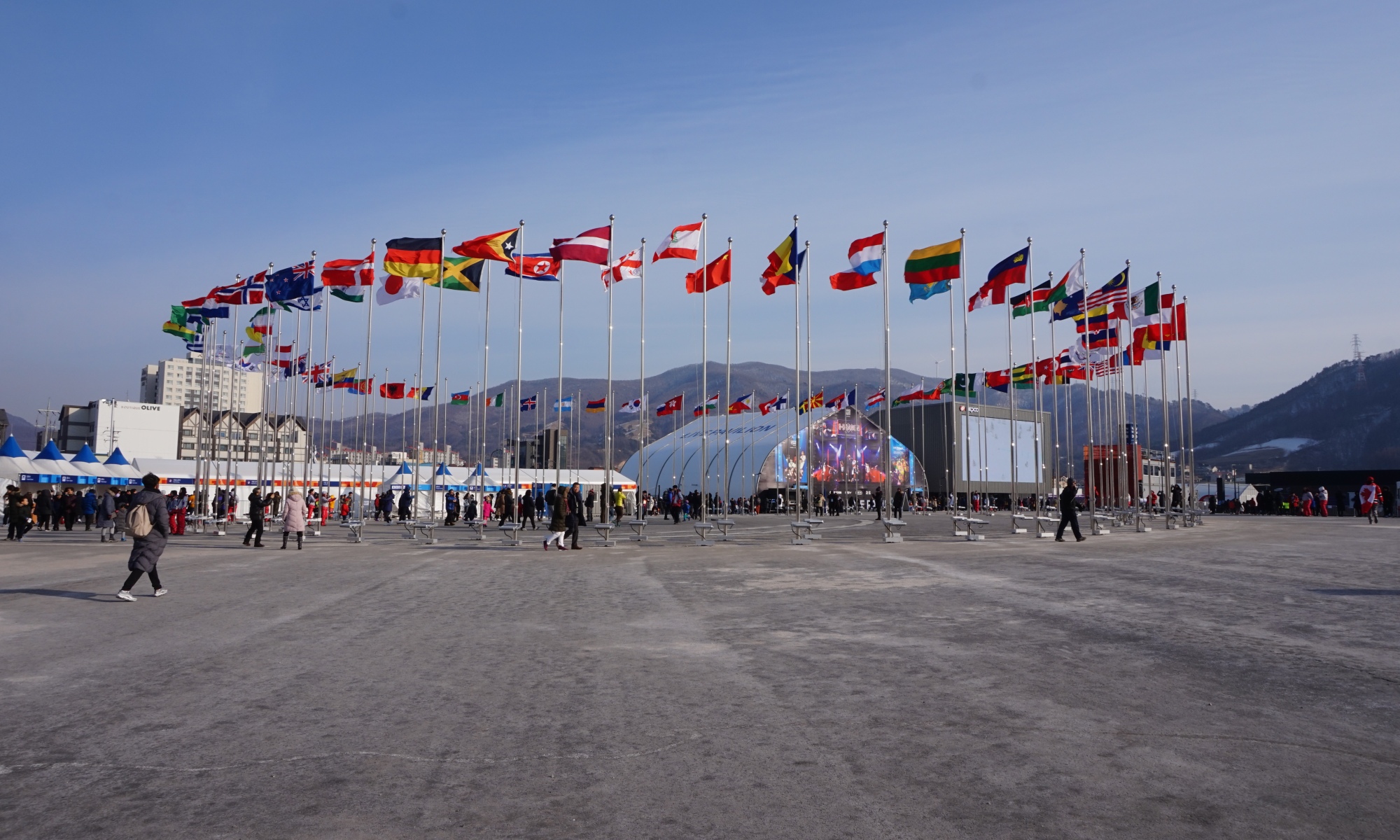 According to our original plan we would just spend a few days in South Korea to travel from one port city to the other in order to make our way to Russia. However, we learned that Donghae, the departure port for Russia, is close to PyeongChang, the area for the 2018 Winter Olympics. Therefore, Gitte decided we simply had to squeeze some sport into our programme and gave Ulrik tickets for the Men’s Qualification for Ski Jumping Large Hill as a Christmas present.

Our journey to South Korea took off in Hakata, a port city in Japan featuring a really cheap ferry for South Korea. The ferry ride was quite nice with a cabin, even though it was only 5 hours and 30 minutes during daytime. Our cabin was a Japanese style dorm, which we shared with with two Korean families and a Korean couple, and it was all very comfy and quiet.

Towards the end of the trip some members of the two families found courage to ask us where we were from etc. and they ended up trying to help us figure how to get to PyeongChang. They were all very worried about the fact that we did not have bus tickets yet, as the combination of Winter Olympics and Korean New Year put quite some pressure on the Korean infrastructure. However, language barriers made their efforts little helpful to us, and we left the ferry even more worried about how we would ever make our way to PyeongChang than when we boarded…

We went through customs without problems, and set off to figure out how to get away from the port and how to get tickets for whatever type of transportation that could take us closer to the Winter Olympics. And just there in the arrival hall at the ferry port we found a tourist information. They insisted (as always) that they did not speak English and thereafter gave us a full list of the timetable of buses going from Busan to Gangneung, the gateway city to PyeongChang, a detailed description of how to find the bus terminal, and advised us to go there that same evening and buy tickets.

Even more worried about whether there would be more bus tickets for sale we hurried to the metro and took the 45 minute journey to the bus terminal. Here we got our tickets in about 2 minutes for the departure we wanted at the price we had found on the internet upfront. Worries absolutely wasted, but we were just really happy to have the tickets! Then we took another train 45 minutes back to Busan city and found our hostel 🙂

When everything went out as we hoped with the bus tickets we suddenly had a full, worry-free day to spend in Busan. We checked in with the owner of the hostel and he gave us some insights on what to see and do in Busan. We choose the “go see a temple, an old fortress, and hike a mountain” option in Geumgang Park as a nice afternoon activity with some 10 km hike included. It was really nice, not too touristed, and sunny. On our way we learned that we were visiting the Beomeo-Sa temple, Geumjeong Fortress, and hiked the Geumjeong-san mountain. 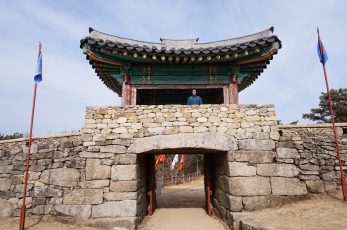 We had planned to walk from the Beomeo-Sa temple to the north gate in the old fortress wall, and then follow the wall for 9 km to the south gate and go down by the cable car. When we came to the cable car we learned that we were 35 minutes late (yes, one should check operating hours for cable cars 😂), and we realised we would have to walk down the mountain also – and that we needed to walk fast to avoid walking on the mountain in the dark.

The path down was almost not a path, more like somebody had dropped a few staircases on some very steep passages and then we could try to find them. Thank you very much to the person(s) who has marked the track on OpenStreetMap 😄 On our way down we came by the loveliest buddhist temple partly placed in a cave – see picture below. At the time we did not know what it was, but we have afterwards learned that it must be part of the Seokbul-sa temple.

We just snapped a quick picture and continued our descent – and we made our way down with the last daylight. We will make sure to plan better in the future! 🙂

February 16th was our Olympic day and we started out early by bus from Busan to Gangneung. Besides some Korean men arguing very loudly in the bus it was a no-frill bus ride. In Gangneung we got tickets for a bus taking us to Hoenggye, the Olympic city for snow sports, were we had accommodation for the night. Already outside the city we got a taste of the Winter Olympics as the bus ended up in a long line trying to get off the highway with all the other olympic guests. That gave us the opportunity to take a picture of the two mascots of the Winter Olympics – as cute as you will only make them in Asia! 😍 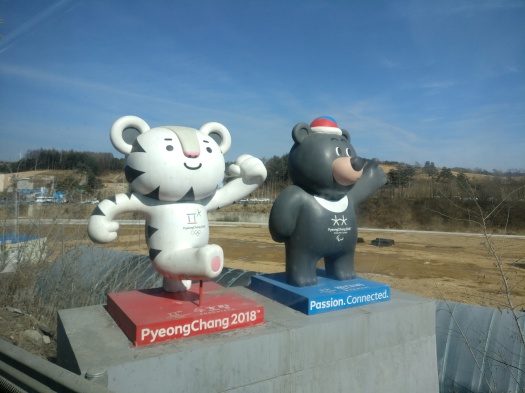 Our accommodation was a bit of an experience – dorms with tents. Besides the slightly odd interior it was a fine guesthouse with plenty of other budget travellers making their way to the Winter Olympics. And as sport always do, it unites people and we soon had a number of friends keen to give us advice, help us with WiFi, and what not 😋

Well established in the guest house we had a few hours to explore a real Winter Olympic city. It was all festival mood and chaos, but still quite enjoyable.

In the evening it was time to find the venue for the ski jumping. After some last minute panicking about the ticket app not working offline, we had to move on to catch a shuttle bus. After some waiting and security checks we made our way to the ticket check counter slightly more panicked, as mobile data was not working on our phones and we therefore could not get access to the tickets. However, about 2 meters from the counter we suddenly found WiFi, and we could pass without any more hassle 😲

The rest of the evening was just about watching the ski jumpers and trying to stay warm. Ski jumping looks insane when you watch it on TV, and watching it live is no different. We watched about 120 jumps, and it looks equally insane every time! It was a great evening, and a really great experience going to the Winter Olympics – probably the biggest sport event we are ever going to attend 😉 In lack of any Danes to cheer on we cheered on the Norwegians, the Finns, and the Koreans, which appeared slightly confusing to the Americans in front of us, who never really figured where we are from 😛 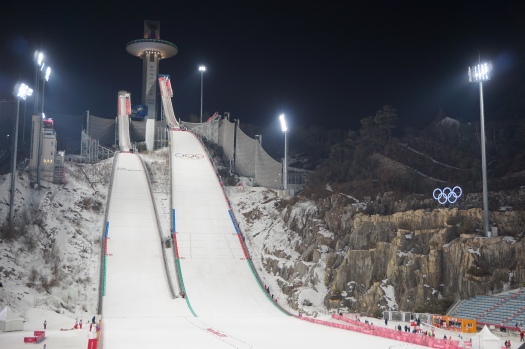 The rest of our time in South Korea we spent getting from PyeongChang to Donghae, the ferry port to Russia, and doing a little sightseeing in Donghae. It seems to be a fishermen’s city not polished for tourists or anything, and we had a great walk at the harbour where they sell live fish! 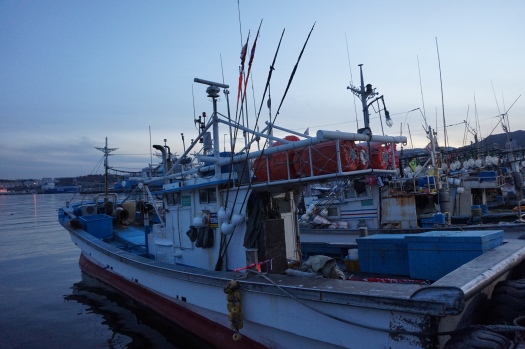